From under his bed, 72-year-old Abu Hamed takes out a yellow case that he has held on to for dear life since its contents were passed on from his father, who in turn inherited them from his father.

Abu Hamed has not opened the case in 10 years, but a recent initiative, under the name of Kushan Baladi, aiming to prove Palestinians’ historic ownership of land seemed worth digging out his family’s land titles for.

Abu Hamed, who asked to be referred to by his nickname, was two years old when his family was expelled from Barbara, a village 17 km northeast of the Gaza Strip, in 1948 by Jewish militias.

'People used to ask me: Abu Hamed, is the case full of dollars? And I would answer: No, it is worth more than all the dollars in the world' - Abu Hamed

“These land titles are for my family’s 200 dunums in Israeli-occupied Barbara. I inherited them from my father, who did so from his father,” he tells Middle East Eye, adding that one of the documents was issued by the Ottomans in 1788.

“It means it is four times older than Israel's occupation itself. So, I have been caring for them as if they were my children since we came to Jabalia camp [in Gaza] in 1954.”

An estimated 700,000 Palestinians were forcibly expelled from their lands during the establishment of the state of Israel in 1948, in events known to Palestinians as the Nakba, or “catastrophe”.

Palestinian activists launched Kushan Baladi in May 2021 in response to the narrative pushed by Israeli officials and media that the forced evacuation orders against Palestinians in the Sheikh Jarrah neighbourhood of East Jerusalem are nothing more than a real estate dispute.

The initiative aims to impress the right of return in the minds of young Palestinians; demonstrate the reality of the Israeli occupation to the international community; and form a civil group of lawyers and activists across different fields that would build a strong legal case to prove the right of Palestinians to their land, by submitting land titles to the International Criminal Court.

The faith lives on

Abu Hamad says he always talks about the family’s occupied properties to his 11 children and 39 grandchildren.

“I put the land titles under my bed. No one can touch them, not even my children. With every passing day, my faith of returning to my lands once again becomes stronger because the faith also lives on in the hearts of my children and grandchildren.”

Abu Hamad recounts, lightheartedly, how during Israel’s four wars on Gaza, he would hold the case tightly as they fled the bombing to take shelter in schools run by the UN refugee agency (UNRWA).

“People used to ask me: Abu Hamed, is the case full of dollars? And I would answer: No, it is worth more than all the dollars in the world.

"Our rights will be preserved whether Israelis agree or not." 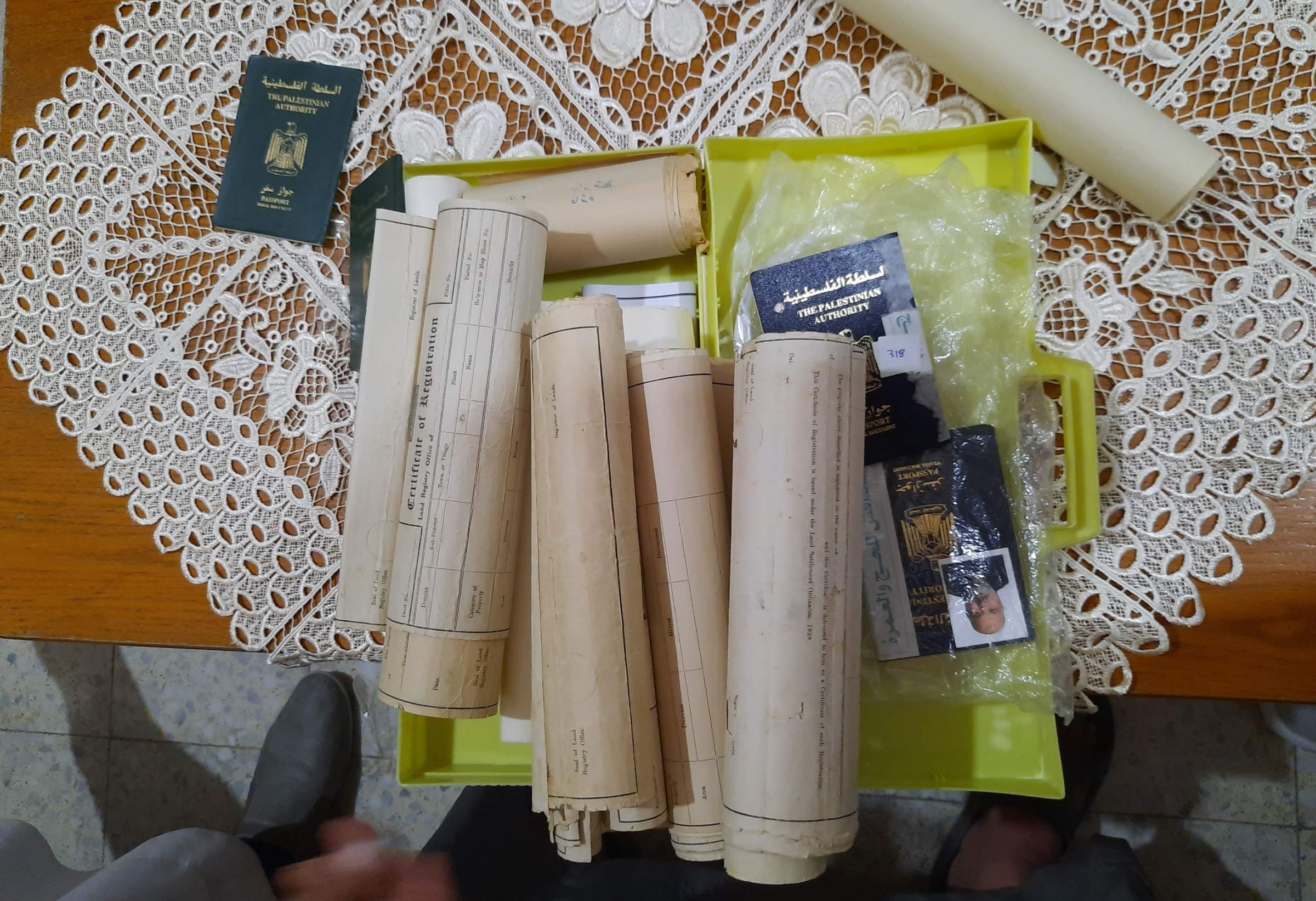 “I put the land titles under my bed. No one can touch them, not even my children," Abu Hamed says (MEE/Ahmed al-Sammak)

Founder of Kushan Baladi and retired colonel Akram Jouda says the idea of the initiative first came around as a way to counter Israeli claims regarding the Sheikh Jarrah neighbourhood where families are facing forced evictions from their homes to make way for Israeli settlers.

“I wanted to create a new legal peaceful resistance with Palestinian land titles acquired before the Nakba in 1948,” Jouda tells MEE.

In its first two weeks, the six-member team running the initiative, consisting of Jouda and five activists, grew to 40 members, and eventually to 100.

“We first listed the names of Gazans who possess land titles dating before 1948, then paid them a visit to verify the documents before adding the information to our data,” he says.

The team has reached tens of families and connected some with media outlets in order to show the world who are the original owners of the land that Israel occupies, Jouda says.

“The case of refugees unites all Palestinian parties. We also want to assist the internationally recognised Department of Refugees Affairs of the PLO to show the ugly truth of the occupation,” Jouda says.

Abu Hamed’s 26-year-old grandson, Ayman Hammad, says the extended family consists of 50 people living in a four-story house, which makes him think of the different life they would have had had they been living on their own properties.

“I always tell myself that if we inherited those lands from my grandfather, we would be wealthy and have vast properties,” Hammad tells MEE.

“I seek God’s protection from giving up our lands for any reason,” he says when asked about the possibility of relinquishing his right of return. 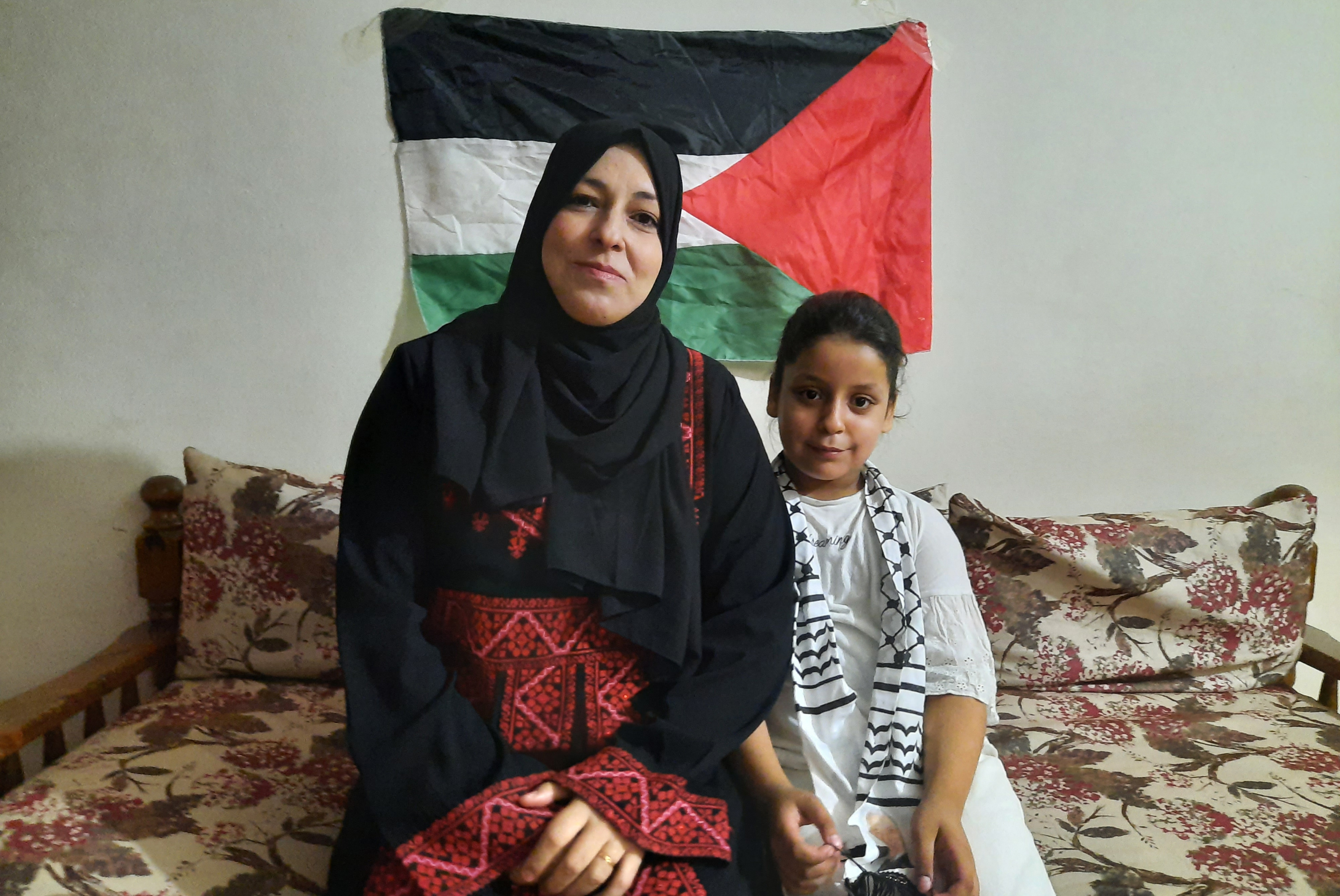 Some 500 metres from Abu Hamed’s home in the northern Jabalia camp, Elham Abu Eid, a 42-year-old mother of three, talks to her eight-year-old daughter Alaa about the initiative and their original hometown of Barqa, located 37 km northeast of Gaza.

“The initiative is wonderful as it makes the young generation aware of their grandparents’ heritage and ancestral lands, which they have only seen on the internet,'' she tells MEE.

Abu Eid says it is important that Palestinian children know their own history and “how Zionists expelled their grandfathers and have been stealing our lands since 1948.”

Alaa, meanwhile, yearns to go to Barqa, where her grandfather Mahmoud and his family used to live.

“I am over the moon whenever my mother tells me about Barqa,” she says.

“My teacher asks us almost daily to draw the map of Palestine and outline our original cities. She also asks us to write a little about them.

“We live in Jabalia camp, which is very populated. But, unlike Jabalia, Barqa is very wide and beautiful.”

Lawyer Salah Abdel-Aty, director of the International Commission to Support Palestinian Rights, says Kushan Baladi shows that Palestinians are the true owners of the land.

“Those titles were issued by either the [Ottomans], the British or Palestinian governments prior to the Nakba,” he adds.

"The crucial aim of the initiative is to prove the right of Palestinians to their lands, and expose Israeli claims and lies stating they themselves are the owners of lands.”

'These land titles refute the common false claim that Palestine was a land without people' - Mohammed al-Madhoun, director of Hamas' Division of Refugee Affairs

The lawyer says that the demolition of properties, expelling Palestinians and replacing them with settlers may amount to war crimes.

“No one would disagree about an initiative that endeavours to show the legality of the right of return. It reidentifies Palestinian refugees,” says the head of PLO’s Refugee Affairs Department, Ahmed Abu Houli.

“It is also a way to encounter the continuous attacks aiming at terminating UNRWA and the refugee cause.

“We want all these initiatives to be under the PLO, which is the sole legal representative of all Palestinians.”

Meanwhile, the director of the Division of Refugee Affairs in the Hamas movement, Mohammed al-Madhoun, says that based on Ottoman and British land records, Palestine is for Palestinians.

“These land titles refute the common false claim that Palestine was a land without people. The obvious fact is that there were civilised people conforming to the laws,” he says.

“This initiative strengthens Palestinians in their conflict on identity, existence, and history.”

Hammad, meanwhile, also takes strength in the land titles, as they reinforce his belief that they will return to his ancestral land in Barbara.

“When my grandfather, Abu Hamed, dies, my father will inherit them, and so will I when my own father passes.

“We will all do the same thing until we return.”

History of the Sheikh Jarrah neighbourhood

Palestinians Expulsion
Most Viewed
Most comments